Before starting using DINAMIS, it is important that you familiarize yourselves with some of its basic principles, assumptions and terminology.

Simplifying complex processes is what we are proud of, so if you would ask us how DINAMIS works, we’d answer: 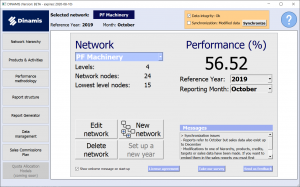 You need to do the above just once, or whenever something changes. Then, once per month, just enter your monthly sales figures, with a very simple .csv file.

That’s it! You can now generate all your sales reports.

You can easily modify or import new data, add or remove products, switch between years and months, create other networks, add or remove network nodes, and more, in a straightforward way. Everything is pre-configured so there’s no need for you to build or design anything.

Such simplicity comes with some assumptions, so please have a close look at the following: 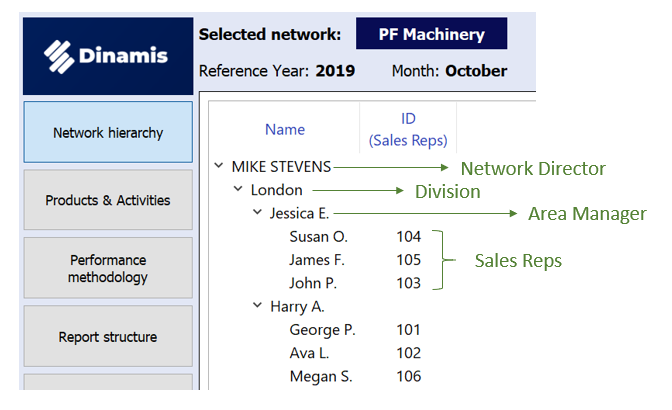 By the same reasoning, the Sales Reports generated for your network nodes, are identical to each other, i.e. you cannot have a distinct, from a design perspective that is, report for the Area Managers than for the Sales Reps.

However, it’s completely up to you whether you assign quotas for the same products to all of your sales nodes. So, in our example, maybe Jessica’s team has quotas for product A while Harry’s team does not. Their reports will look exactly the same, containing both A and B,  but the overall performance will be calculated based on different product portfolio.

This beta version of DINAMIS assumes that you have an annual budget but you set quotas per quarter and monitor the performance on a monthly basis. Therefore, the Overall Performance Indicator (OPI) is calculated on a Year To Date basis, corresponding to an annual performance.

Based on the feedback we will collect from the beta users, we’ll decide whether we must incorporate alternative approaches.

Handling data is effortless in DINAMIS. You just import the data you want in the data management page. What we really want to discuss here has to do with the synchronization between the data and the reports.

Consider the following example: By the end of March you enter the monthly sales figures and generate the 1st Quarter Sales Reports. Then, you get notified that a sales figure for a sales node was erroneous, so you make the correction. The moment you do so, the synchronization banner changes to yellow with a message “Synchronization: Modified data”. However, if you try to re-generate the March Sales Report once again, nothing has been changed.

This is done intentionally. It gives you the freedom to modify whatever you want and decide when you want to synchronize these modifications. All the calculations take place, only when you press the Synchronize button and you probably do this, when you are ready to generate the April’s Sales Reports.