The objective of every Sales Commission Plan is to give you a straightforward way to incentivise and reward your salespeople based on how they have performed. Here we introduce a very flexible and practical approach, the DSCP, which calculates the commissions for all the network nodes, based on their:

with the weights of your choice.

It is a relative SCP in the sense that the calculated commission for each node, is relevant not only to its own OPI and sales credits, but also on the OPI and sales credits of all the other network nodes in the same hierarchy level. This approach has its pros and cons as opposed to an absolute SCP, which is more straightforward but much less flexible. We have a few notes on that later on.

The DSCP is very easy to use, so let us demonstrate how it works through the following example, where we assume a three-level network hierarchy:

The first thing you do is to set a commission range for the entire network and under which conditions it will be rewarded. In the simplest of ways:

This means that the network performance (OPI) must reach 90% for the beneficiaries in all hierarchy levels to be rewarded a total amount of $ 240,000. On the other hand, the maximum of $ 440,000 will be allocated if the performance reaches 120%. For intermediate cases, a simple method of three is applied.

We assume for the moment that our exercise takes place by the end of the year, where we consider an annual network performance of 96% resulting in a $ 280,000 commission.

The second thing that you must set, is how the network commission will split at hierarchy levels. It is completely up to you to determine the commission share for each level and you should consider the base salary of each level, its responsibilities and of course, its headcount. For our example, we choose the following arbitrary shares to allocate the $ 280,000:

We have the commission per hierarchy level, so the next task is to allocate the commission within each level. Actually there is nothing else for you to do, except that to optionally set the two following parameters, for each level:

To illustrate the above for our five Area Managers, we do not initially set the optional parameters. Based on that, we get three Area Managers to be rewarded with a total of $70,000 commission:

It is time to calculate the actual commission per Area Manager. But remember, we are building a relative SCP and we want to consider how all the other Area Managers have performed as well. To achieve this, we calculate:

In simple words, for our three beneficiaries, the sum of their deviations equals 41.64%. John’s share in this sum is 64.05%, so John will be rewarded with the 64.05% of the commission for all the Area Managers. Ha has performed much better, as far as the OPI is concerned.

Look however at Emily’s figures. Her sales credits account for about 63% of all the Area Managers but she’s only been rewarded with a $ 13,610 commission. Compare that to John’s figures and commission. If you are 100% confident that you have set the proper quotas to each Area Manager, then there is really nothing that you should change. John deserves a much higher commission, because he did perform much better. This is rarely the case however, so if you have any doubts, then we strongly suggest that you use our safe mechanism, where the commissions are not calculated solely based on the OPI (performance) but also on the sales credits (magnitude). Similarly:

You weigh these two factors as you wish to calculate the final commission. In our example we have chosen a 60% – 40% ratio in favour of the OPI factor. Compare how John’s and Emily’s commissions have changed. Where you to favour even more the sales credits factor, you would have been rewarding a much greater commission to Emily, getting a step closer to what an absolute SCP would do (she sells the most, she gets the most).

How DINAMIS implements the DSCP 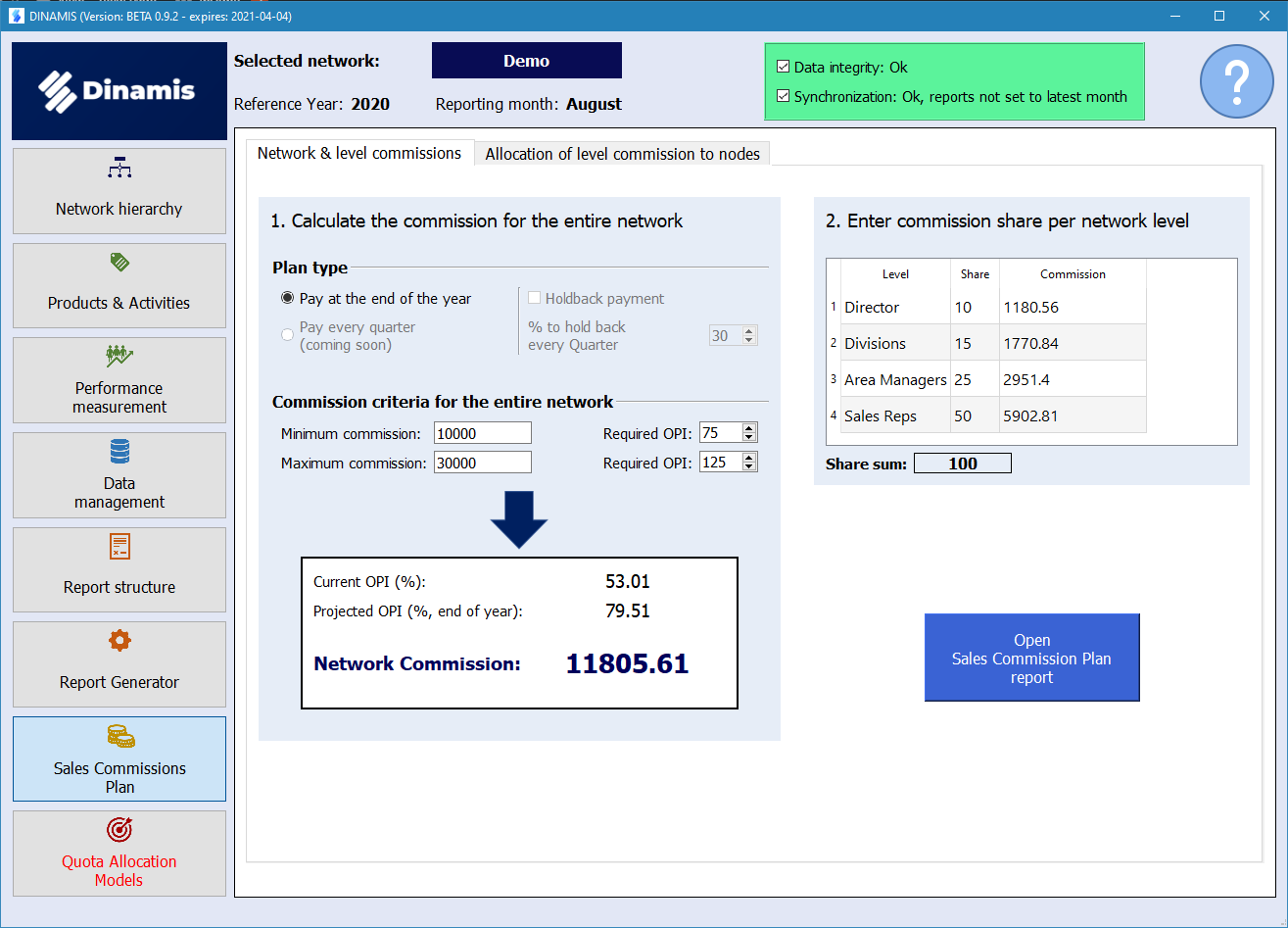 The figure below displays the report produced for the DSCP by DINAMIS. Check here for a detailed description. 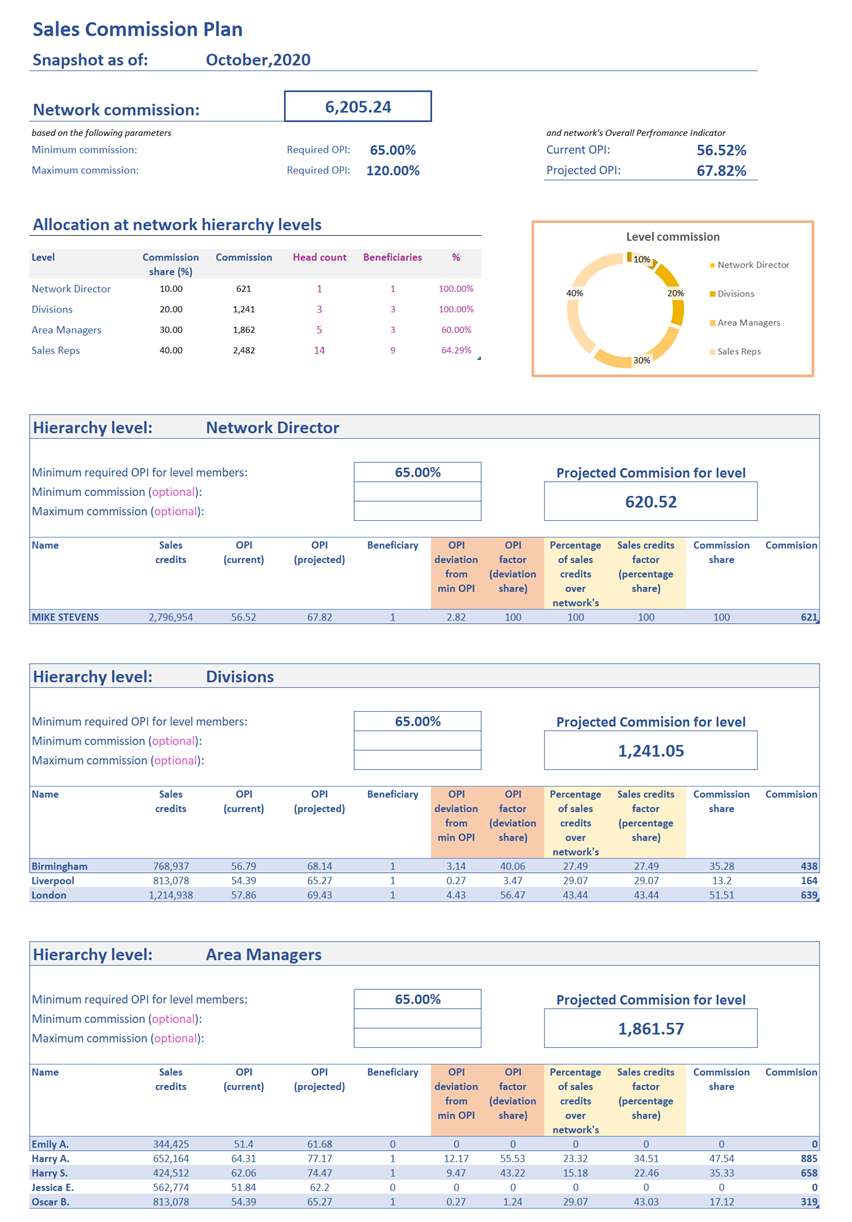